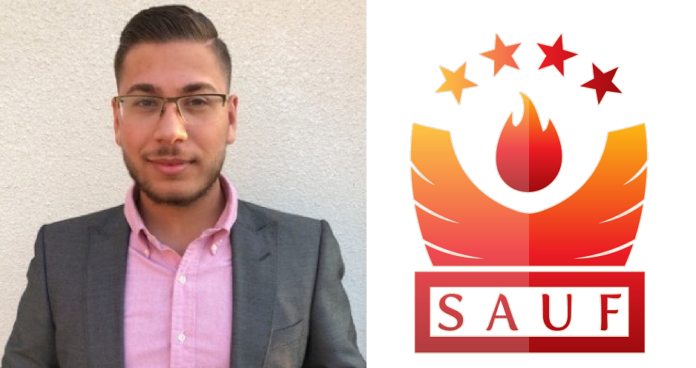 19 year old Jacob Lahdo is the Vice Chairman of the Syriac-Aramaic Youth Federation of Sweden (SAUF) and writes about the world community with regard of the future of the Aramean (Syriac) people.

The Aramean people are the indigenous people of the area formerly called Aram. In today’s Syria, Turkey, Iraq and Lebanon there is a multi-millennial legacy of my people’s group, and you can see the influence of our church fathers and our Aramaic language all around the world. However, the deep roots of our group in the area have been uprooted and seriously damaged for centuries. Genocide after genocide. Oppression and persecution. We went from beinga a majority to a minority, and eventually the minority also became refugees scattered all over the world. Most of what once was, is no longer left.

Just lika a cutting from a tree, I have been planted here. In a place far away from my ancestors, I live an absolutely fantastic life with great gratitude to Sweden, where we have finally been able to live in freedom and in peace. I feel at home with the Swedish and my everyday life in the country that became a sanctuary for my people and that allowed us to preserve our threatened heritage while still becoming Swedes.

Rarely have I recognized myself as much in the news reports as in recent times. The Amazon is in flames and it is rightly noticed as a threat to our entire existence where thousands of species must be saved. No one stays unmoved by the madness. With that said, I think back to what I’ve seen on social media over the past months. I saw big fires there that threatened our hometowns and monasteries in the southeast of Turkey (Tur Abdin) without government and emergency services acting. I saw new terrorist attacks against Christian areas in Syria. As if the multi-millennial legacy was not threatened enough, the persecution continues, and no matter which of the homelands you are in as an Aramean, you are constantly subjected to abuse with the perpetrators hoping that the last of us will pack up and leave for good.

Why doesn’t the outside world do something? Why are these Countries silently accepting this treatment of an indigenous population despite their cries for distress? How long can a stateless people’s group survive after being made heirless by burning their roots to ashes?

That one of the world’s oldest living indigenous peoples is threatened with extinction continues to fly under the radar of the media and the world leaders. At the same time, there are winds blowing in Sweden thet demand of us, despite being praised for how well integrated we are, to forget the roots we have and what once were. Parties that want to replace integration policy with an assimilation policy have successfully made that thougt more common to discuss around the voters’ lunch tables.” You should simply follow the customs of where you’ve gone”, is what they think innocently. “Indirectly eradicating us as stateless”, is what I think full of anxiety.

In my hometown of Norrköping, as well as lots of other cities in the country, we Arameans are known as those who are so enterprising and diligent. Those that are well integrated but still traditional. Those who are very Christian with the grand parties. But in the back of the head of your hairdresser that makes you all pretty, there’s always Grandma’s story of how she survived a genocide. In the priest’s mind there is a concern about whether our ancient monasteries he studied at will be confiscated by Turkey or burned down. Your good colleague at work has a hard time sleeping through the nights because he cannot accept that he never again
will have the opportunity to meet his relatives in Syria.

We are simply put normal people who are victims of a silent and accepted genocide here as wel. It is not only the bombs and guns that kill our brothers and sisters that are a threat to our existence. We face displacement, forced assimilation and political measures in the home countries that make it harder for yet another generation here in the diaspora not to give up the fight for that legacy to continue. The Swedish government that could help us by recognizing the genocide called Seyfo in 1915 broke its promise to do so. Neither the governments of Reinfeldt nor Löfven have, on a humanitarian level, wanted to help us deal with our people’s particularly vulnerable situation in Syria and Iraq. At the same time, huge sums have been sent to clean and cut corruption from the government agency called SIDA.

When we first came to this country in the 60s and 70s, it was said as a joke that everything was fantastic here, except for the cold climate. But if nothing is done about the climate that we live in, in a figurative sense, the cuttings will never be able to grow. And the fruit from the tree that once grew large far from here will never be seen again. Today’s endangered species will only be found in the history books. Because, judging by everything, the men and women in power seems to think that some species are simply more worth saving than others.

So forgive me Sweden if you take offense in my refusal of assimilation or to return to our homeland to face death. I have not lost hope of survival
yet.

Disclaimer: This text was translated from the original Swedish article