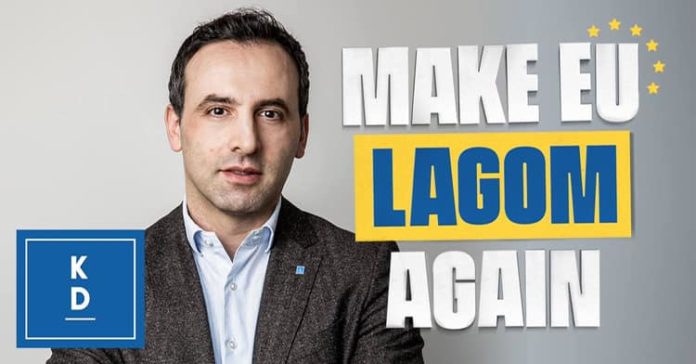 On May 26, it is the election day for the EU and being on the fourth place on the list of the Christian Democrats of Sweden, Yusuf Aydin firmly believes that he can make a difference in Sweden, Europe and the Middle East.

Yusuf came to Sweden from Turabdin in the mid-1990s and built up his relationship with the Aramean (Syriac) diaspora in Norsborg that he became a part of. As a stranger in a new country, he felt a sense of security and fellowship in the Syriac Orthodox Church and the local Aramean organisation where he came into contact with other arameans, and his process to
establish himself began immediately. But being a member and visitor to theese organisations was not enough for him.

“After a few years, I became active in the Youth federation of the Syriac Orthodox Church in Sweden (SOKU) where I acted as chairman, and I have since been active in a number of Aramean organizations and within the Church’s diocese board.”, Yusuf explained.

In Sweden’s Aramean diaspora, Yusuf’s involvement in the mentioned organizations has led him to be recognized in parishes and associations around the country for his commitment to his ethnic group and his church. However, alongside this commitment, another commitment grew. Because after a few years of hard work in the Aramean organizations, Yusuf came to an insight:

“I realized that my involvement in the organizations and the church was not enough if I wanted to see a change and really make a change. It was through political commitments I could help the Aramean people here in Sweden but especially in our home countries on a different and larger level. I thougt of my experiences from Turabdin and our vulnerable situation and felt a responsibility to take the opportunity I had her to make a difference in Sweden, while also contributing to making improvements down there. “, Yusuf continues.

After many years of being active in Swedish politics, Yusuf now sees Brussels and the European Parliament as his goal. But why is it that he would rather work in the EU rather than the Swedish parliament? To try and understand he was asked if he believes he has more room to make a diffrence with his key issues there:

“The EU has a tremendous role in international politics where it often makes a crucial difference. The EU is the world’s strongest economy and has a great potential to influence the world through tools such as trade, diplomacy, sanctions, defense cooperation and aid. The EU should push for the promotion of democracy and human rights within and outside the Union.

If the EU acts united in foreign policy and with the tools at its disposal it can play a crucial role least for say the Christian peoples of the Middleast who are being persecuted.”, Yusuf replies.

Yusuf clearly states what issues he is driven by the most, and he explains his views of how he wants the EU to play a role in theese issues:

The EU election has historically been an election with low voter turnout and this year major efforts have been made throughout Europe to encourage increased voter participation. Therefore, Yusuf was asked if he has anything he wants to say to the Arameans living in their diaspora in Europe, and who might consider whether or not it is important to be involved in and keep track of EU policies:

If we Arameans want to achieve results that in the long term improve our people’s situation in the diaspora, but above all for our sisters and brothers who remain in our home countries, then it is crucial that we have people who engage politically, actively and strategically. We have to work with issues that are important to us. It is only through politics and diplomacy that we can claim our rights and create the conditions for us to survive as a people in the future here in the diaspora and especially in our home countries in the Middle East.”, Yusuf concluded.